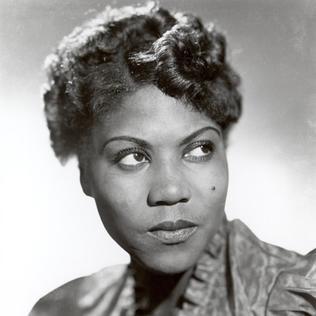 Sister Rosetta Tharpe was a singer, songwriter, and guitarist widely regarded as "The Godmother of Rock and Roll." Musicians such as Chuck Berry, Little Richard, Elvis Presley, Eric Clapton, and Bob Dylan all cited her as an influence on their work. [1][2]

In the 1930s and 40s, she attained considerable popularity with her gospel recordings, characterized by a unique mixture of spiritual lyrics and rhythmic accompaniment that helped create the entire genre of the rock and roll.

Tharpe was a pioneer with her guitar technique; she was among the first popular recording artists to use heavy distortion on her electric guitar, presaging the rise of electric blues.

Her 1945 hit "Strange Things Happen Everyday", recorded in late 1944, featured Tharpe's vocals and electric guitar with Sammy Price (piano), bass and drums. It was the first gospel record to cross over, hitting no. 2 on the Billboard "race records" chart, the term then used for what later became the R&B charts in April 1945. The recording is frequently cited as key precursor of rock and roll.

In the 1950s, an era when anti-LGBT discrimination was widespread and institutionalized, she was as openly bi as possible given the circumstances.[4]