Welcome back, readers, to a rather serendipitous edition of The Unicorn Scale.

Serendipitous? Why, you may ask? Well, as I've said in previous articles, I have a long list of new and revised queer cinema to share with the world in this little digital corner. It's so long that I sometimes wonder if anyone else also saw some films, or some little scenes in TV, as bi. And one of those movies is the touching, seminal picture, Brokeback Mountain.

I've wanted to write this review for at least three months. It was climbing to the top of my list as I honed in on the Oscar theme in March and planned to pitch it for this month. Then, when I was in the middle of writing my final piece, Talia wrote up this great bi Oscar round up ... and look what was on that list! Who could ask for a better sign than that?

So off we go. Brokeback Mountain is a 2005 romantic drama about two male cowboys, and their secretive love affair, that runs the course of decades in mid-20th century Wyoming. The stirring tale started life as a short story in the New Yorker, by Annie Proulx, before morphing into an independent motion picture. The final product racked up three Oscars— Directing (Ang Lee), Best Adapted Screenplay (Larry McMurtry & Diana Ossana), and Best Original Score (Gustavo Santaolalla— feel free to listen to the main theme as you read. The film also notoriously lost Best Picture, in one of the great upsets in Academy history; Crash went home with the ultimate win, to much controversy.

Now before I start this deep dive, it's time to give a heads up— there will be spoilers from here on out. Also, if you need a reminder on what the rating system is all about, please look over here.

Telling a story like Brokeback Mountain, especially at the time of its release, was no easy feat. It's important to keep in mind the historical context of this feature's entrance into the culture. The 2004 election season specifically targeted gay marriage as a sticking point on certain ballots and brought the issue into the national conversation.  And as far as cultural representation, queer culture was only just getting into the spotlight, but mostly with stereotypical characters or personalities, from Jack in Will and Grace to the men of Queer Eye for the Straight Guy. Mainstream fare had not seen much other than the flaming gay caricature for acceptance. These people and characters often dodged typical masculine personality traits, even though LGBTI people have always come from all walks of life. Brokeback Mountain stood out as a new examination of the most American portrait of men, and felt both jarring and revelatory for its time (and even now).

What really stood out to me in revisiting this classic story was not just the level of talent in the production, but the delicacy with which everyone executed their part. How extraordinary to bring such epic feelings to an intimate queer story. Director Ang Lee's tender direction gave space for this sheltered relationship to breathe, framing the Rockies with generous vistas and bringing in claustrophobic settings when Ennis (Heath Ledger) and Jack (Jake Gyllenhaal) must retreat to their socially approved lifestyles. Lee had decided to retire before taking on the production, and noted directing the picture nourished him back into directing.

It's easy to tell this was a special project for everyone involved because of the intimacy afforded to the characters' arcs whenever possible. Neither Lee, the cast, nor the writers treated this romance any differently than scores of straight, tragic love stories, which makes it all the more effecting. There is a sparse universality that touched even the most hard-hearted who entered the theater; most entered (myself included) thinking it was the gay cowboy movie, but left the cinema without the same sniffing dismissal. That is a herculean accomplishment for one film.

Ledger's performance was a huge break for him as a dramatic actor, and it's easy to see why. Ennis' wrestling with not only his feelings, but his principles and ideals of toxic masculinity, transcended his specific gender and resonated with anyone who has struggled with their identity, and anyone who has experienced deep loss... which basically means everyone with a pulse. I felt gutted watching him all over again.

I also deeply appreciated that the screenwriters explicitly made it clear both characters not only had relationships (albeit strained ones), but continued other romantic pursuits. For all their talks of riding out this attraction, they both continued to exhibit bi attractions throughout the story... and that never became an aside. It was rare then, and is still rare now. It's a gorgeous rendition of how complicated and dangerous it would have been at the time to carry on this type of bi affair, especially in more conservative pockets of the nation.

Beyond the film, I also deeply appreciate what Brokeback Mountain did for pushing queer cinema into the movie mainstream. Its cultural gravitas may still get some homophobic backlash from time to time, but it's a vernacular shorthand that everyone understands. (Try debating the same impact for Crash. Go on, I'll wait.)

Oh, and on an amusing note: I vaguely remembered that it was implied Jack started an affair with another guy. But what I didn't recall was that the actor who played him was David Harbour— AKA Chief Hopper from Stranger Things! That was a fun surprise.

Of course I didn't like the fact that the term bi was never used or broached. But I'm giving a timid pass because this world barely even uses the term queer— and even then as a derogatory word when Jack and Ennis won't meet each other's eyes. So I'm gonna go ahead and reclaim it for them. Their behavior, yearnings, gazes, attractions, relationships... they all adhere to the bi definition. Any arguments I have heard from either friends or critics tends to collapse in a logic loop, and I won't keep having these monumentally important characters getting gay-washed (you understand, don't you, Call Me By Your Name). Just because the main romantic story involved two men does not mean the same-sex relationships didn't have merit. Alma and Lureen were never just beards. Hell, Jack outright says to Lureen while they're steaming up some car windows that no matter the speed, he just likes the direction she's going.

Okay. I got that snake out of my boot.

On a different note, it was hard to watch how unhealthy Jack and Ennis' dynamic could get. Even though it wasn't much different from how Ennis spoke to his wife Alma, it was trying to watch him at times not just physically hit, but verbally abuse and threaten Jack. Jealousy is not pretty, no matter the relationship model.

Finally, it irks me on a cultural level there is still a default to label this a gay romance, despite all evidence to the contrary— even from the screenwriters themselves. I was speaking with my friend Ian, who heard Ossana speak at the Autry Museum's Out West exhibit a few years back. When he asked about the portrayal getting noted as a bi love story (to the audible gasp of the mostly-gay audience), Ossana retorted she saw it as a gay love story. I hated to hear of the gay-washing of Jack and Ennis, but he noted: Bi Invisibility is real. People can be staring directly at bisexuality and still not see it.

I suppose that's true. Not only that, but as an artist, I can confirm that sometimes an artist will create a work with one message, but the audience absorbs a different message. I think that's the case with Brokeback Mountain— and I would assert that even without my confirmation bias in place, based on the evidence.

This is truly one of the greatest romance films of the past twenty years. Created from artists all at the top of their game, I believe our entire culture should give it a second look and appreciate it for the great bi romance it is. Its release was a watershed moment for not only LGBTQIA cinema and representation, but queer acceptance in the United States. In my mind, it's inextricable from the historical path towards same-sex marriage—  imagine removing the film from our zeitgeist and consider if we would be where we are with queer acceptance today. So even though it doesn't use the word bisexual, I still have to give this spectacular film 4 out of 4 unicorns.  I just wish our country knew how to quit bi erasure.

The Privilege of Passing as One of the Guys 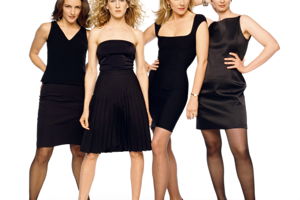 The Unicorn Scale: Sex and the City (Season 4)