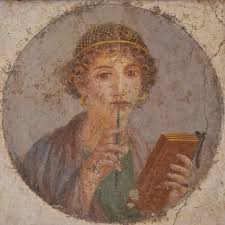 Sappho was an Archaic Greek poet from the island of Lesbos. Sappho is known for her lyric poetry, written to be sung while accompanied by a lyre. In ancient times, Sappho was widely regarded as one of the greatest lyric poets and was given names such as the "Tenth Muse" and "The Poetess."

Most of Sappho's poetry has been lost over the centuries, and people had lost interest in her. She was "rediscovered" during the renaissance, and her poetry has continued to influence poets since then.

Her rediscovery went hand in hand with a popular fascination with her sexuality. Because she wrote love poems to women, Sappho and her island of Lesbos gave us the words sapphic and lesbian.

Although we have lost most of her poetry, the fragments that remain include love poems to men and women.