I’m a 46-year-old bi guy and I’m out to pretty much everyone. With the exception of my parents who are in their early 80s. I’ve always told myself it doesn’t matter. They think that I’m straight as I’m married with kids and I never wanted to upset them. But, the world is changing, people live more openly now and part of me wants to know that my parents love me regardless. The thing is, I feel with their generation, they just wouldn’t understand bisexuality. I think they might think I was coming out as gay and leaving my wife.

Do you think I should risk it and tell them or is it best to leave things as they are?

Thanks for reaching out.

I think the most important thing here is to assess what is important to you. If your parents died, would you always have that nagging feeling that you should have told them and wonder if they would have been okay with it?

Personally, I wish I had gotten the chance to tell my nan about my sexuality. Her acceptance would have meant the world to me. Unfortunately, she died before I was really even out to myself.

On the flip side, there are some older relatives that I’m not really out to. In some ways because I think they just wouldn’t get it. In other ways because we don’t really talk about relationships or identity anyway and I don’t care to have an unnatural conversation. Most importantly, I’m not out to them because — in the nicest way, I don’t really need their opinion on my sexuality. I’m out to everyone that matters and everyone with an internet connection. It’s not that I’m so much closeted — I’d tell them if it came up — but it just never would.

When it comes to the reactions of older people who perhaps displayed homophobic or biphobic opinions in decades past, all I can say is the world is changing. I’ve recently seen firsthand that even those we suspected of being among the most prejudiced can surprise you and rally around to support the people they love. As a society, we talk more than ever about sexuality, identity, and kindness and I really do think those conversations are cutting through.

Characters on television, open celebrities and even people in the community living their truths, it’s all helped to make people of a certain age understand the queer experience. The reaction you would have had from your parents in the 90s is likely completely different now that we are in the 2020s.

Ultimately, it is your decision. You need to decide for yourself how much this means to you. It might go horribly wrong, coming out doesn’t always have a fairytale ending. So be prepared for either outcome.

I’m wishing you all the best and hope that if you do decide to go ahead that your parents will be supportive and proud of their child.

What advice would you give to this reader? Give us your take in the comments below.

Bisexual people often have few other bi people to turn to for support or to ask questions. This means we often can’t build on the experience of other bi people and improve things for the next generation. Ask a Bi Dad is aimed at tackling this.

Lewis Oakley is one of the leading bi advocates and writers, campaigning to improve the public’s perception of bisexuality. Recognised by the Pride Power List 2021 and with various award nominations under his belt, Lewis has been successful in making bisexuality national news.

Lewis knows more than most how lonely being bisexual can feel, particularly in those early years. Now, confident in himself, his relationship, and a dad of two, Lewis recognises how rare and lucky he is. This is why he wants to help where he can by answering the questions of bi people from all around the world.

If you have a question that you would like a perspective on, email at [email protected]

*Lewis is not a licenced therapist, and the advice offered in this column is not intended to replace or substitute for any professional advice. If you have specific concerns or a situation in which you require professional, psychological, or medical help, you should consult with an appropriately trained and qualified specialist. 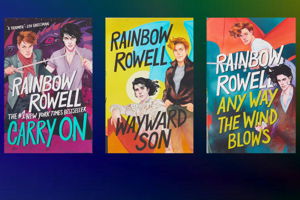 Bi Book Club: She Will Rise